Representatives from Kentucky public health, law enforcement, and other groups gathered at the State Capitol Rotunda on Wednesday in opposition to a bill to legalize medical marijuana.

Richard Nelson of the Commonwealth Policy Center, organizer of the event, said there any many questions and concerns over the bill, which has passed the House and is now in the Senate. 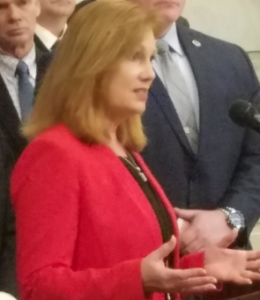 “We need to know which diseases it can effectively treat, how much of the drug is needed, any side effects, in other words, this major public policy shift should be based on science and research, in order to protect the public health and the citizens of the Commonwealth of Kentucky, not mere public opinion or anecdotal stories,” Nelson said.

Garth Van Meter, with Smart Approaches to Marijuana, worried that investors of medical marijuana producers would only be in it for profit, so it could be like the opioid crisis, “with a new generation of heavy users and captive customers. It’s an addiction-for-profit business model.”

Rep. Kimberly Poore Moser, R-Taylor Mill, who says more research is needed, has offered an alternative, which cleared a House committee on Tuesday.

“House Bill 463 will create the infrastructure that’s needed to establish the Kentucky Center for Cannabis Research. It would be housed at the University of Kentucky, but include universities from around the state, who are currently doing research in this space or who want to do research in this space.”

She says since UK and the University of Louisville already have an NIH designation allowing legal research on marijuana, “It would create more clinical trials, more Phase 3 studies and set up an advisory board of experts, including the deans of the College of Pharmacy, Medicine, Agriculture; really anyone who has an opinion about the medicinal qualities.”

The General Assembly has already passed another alternative to the medical marijuana bill.

House Concurrent Resolution 5, which passed the Senate 35-0 on Tuesday and previously passed in the House on Jan. 27 by an 89-2 vote, calls on the federal government to speed up research to determine if marijuana is safe and effective as medication.

The Family Foundation approved the resolution, saying in a statement, “The Kentucky General Assembly is taking a reasonable and informed approach to the medical marijuana issue.”

It is to be delivered to the Food and Drug Administration, the National Institute on Drug Abuse and the Drug Enforcement Administration.

Why marijuana businesses won’t be allowed in downtown East Dundee

Flower-Side Chats Part 2: A Q&A with Bill Conkling, Founder and...

Why Is Marijuana Legalization Not Covered in Mainstream Media? – The...