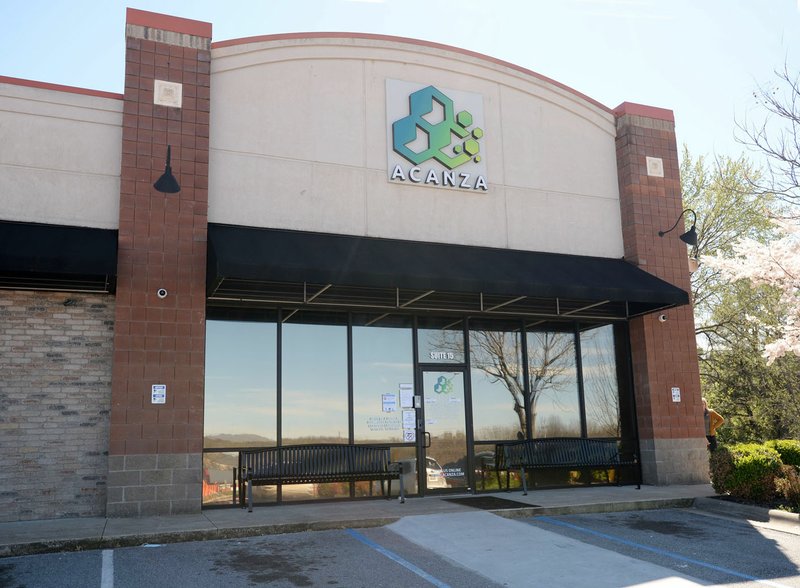 Acanza, a medical marijuana dispensary in Fayetteville is at 2733 N. McConnell Ave. Medical marijuana dispensaries are reducing operational hours, taking orders online and limiting the number of people inside in an attempt to prevent the spread of covid-19. Go to nwaonline.com/200326Daily/ for today’s photo gallery. (NWA Democrat-Gazette/Andy Shupe)

FAYETTEVILLE — Medical marijuana dispensaries have seen a spike in sales since the covid-19 pandemic, but they may have to close if they are determined nonessential businesses, a state official said.

Dispensaries in Arkansas sold more marijuana Friday than any other single day since the state’s program launched in May 2019, said Scott Hardin, spokesman for the Arkansas Department of Finance and Administration.

Northwest Arkansas’ four dispensaries sold more than 29 pounds that day, according to an email from Hardin.

The state hasn’t mandated dispensaries to take any specific measures because of the virus, such as cutting hours, doing home deliveries or only taking online orders, but many dispensaries have done so on their own, he said by phone.

The Source, a dispensary in Bentonville, shortened its hours to 10 a.m. to 6 p.m. daily. Up to three customers may be in the building at one time, said Erik Danielson of The Source. The Source had one window to dispense medical marijuana inside its lobby and recently added two windows in response to the coronavirus, he said. Each window may serve one customer at a time, and no one may wait in the building.

Customers have been buying larger quantities of marijuana at one time than usual, he said. Danielson said people have been “acting crazy” while trying to stock up on medical marijuana since the coronavirus outbreak. In one instance, a patient threatened a staff member with physical violence, he said.

“We are not going to run out,” Danielson said. “There is not a supply shortage.”

Acanza Health Group in Fayetteville has shortened its hours to 11 a.m. to 7 p.m. daily and is allowing no more than five people in the waiting room at one time, Randi Hernandez, owner of Acanza, said.

All Acanza orders must be placed online through Leafly, a website where people may place medical marijuana orders from some dispensaries. Acanza doesn’t offer home delivery.

A representative from The ReLeaf Center didn’t respond to a request for comment Wednesday afternoon.

Stocks To Watch: Top Marijuana Play Near Buy Point Ahead Of...